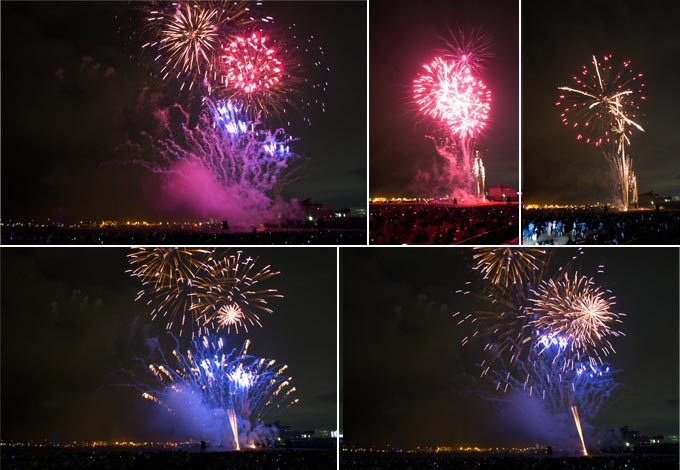 Bam! Bam! Bam! Who doesn't like a good fireworks show?! Or hanabi, as it is called in Japan. The Japanese know their hanabi, real artisans are at work here. From hearts, smileys and all kinds of 'fire flowers' the professionals know what they're doing and keep innovating their art. As most fireworks in Japan take place during the hottest period of the year, August, I was lucky to find two firework shows in the Kansai area that took place in July. On the 22nd, a festival was organized in Ashiya, Osaka.
Because the Japanese won't only lit a few fire crackers, you can easily spend a good part of the day celebrating the matsuri with food stalls, little games and short performances from dancers, singers and even theater shows. Unfortunately the 22nd it was dreary weather. Not the kind of festival weather everyone had hoped for. Although my head was spinning with all the amazingly beautiful yukata (unlined summer kimono) I saw, there was no way to take pictures in the rain. So it was wonderful luck when the rain stopped at the start of the fireworks show!

A good thing I had bought a ¥ 2000 ticket for a seat that I could 'reserve' before walking around the festival grounds. In Japan is not strange to come early at an event and 'reserve' yourself (and your friends!) a good seat by placing personal items on a chair and come back hours later. These items could be fans, drinks, magazines, towels or even a handbag. No one will touch your stuff and your seat is there for you, and your personal belongings, when you get back. There's a positive side and maybe a negative side to this 'reserving' system that everyone respects. The best part of course is that everyone leaves your stuff alone (I ❤ Japan!).

It seemed me and my friends had claimed some great seats, and we could see the show perfectly. The fireworks were lit from the water, in the bay. Many people had taken their place on the beach on blankets and we had seats at the edge of the beach, a little elevated, with free sight on the spectacle. The most spectacular thing was an all-red fireworks piece with a lot of hearts in it after which someone asked his girlfriend to marry him. And she said yes! Aaaaaah, romantic!
After this, the organization took the time to educate the public a little bit with hanabi bingo. Every time just one arrow was shot in the air which you could find on your bingo card. With each new shot it was told what kind of firework you had just seen. But then the real fireworks started and it was amazing! Next year I should maybe plan to visit Japan in August to see more firework shows! 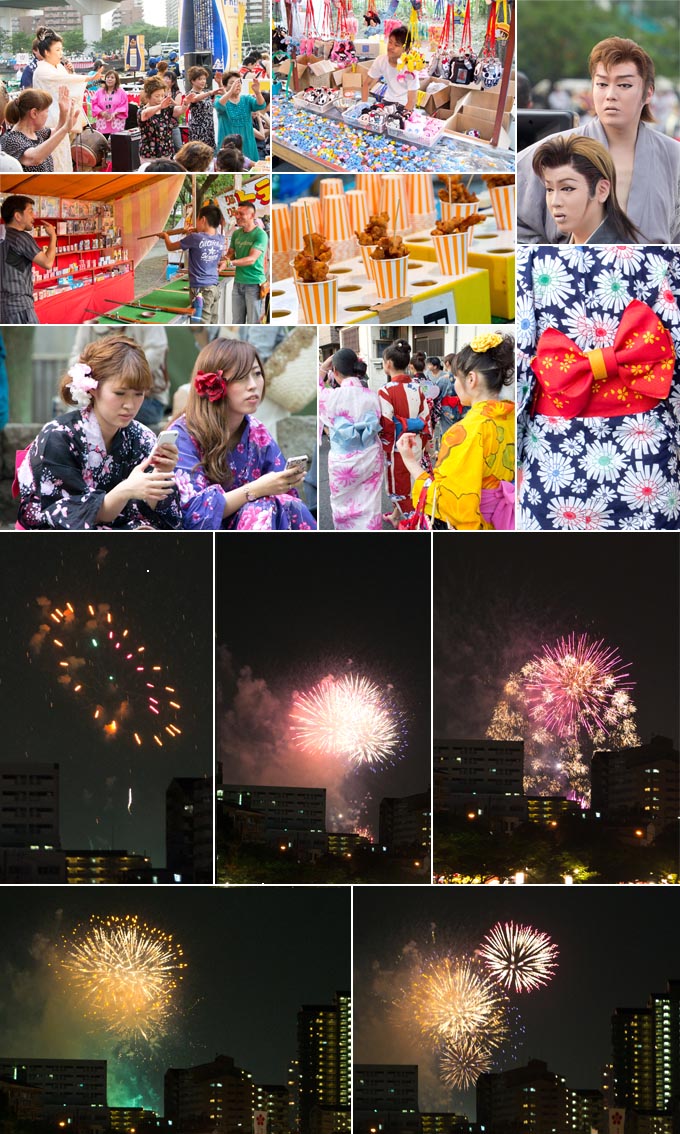 And what could be more festive on your birthday than to see a fireworks show? Osaka obliged and organized another festival on July 25th on the Okawa river. This 'matsuri' was even more extensive. Lots of boats were navigating the river by motor or by oarsmen. Many of the boats sported dancers, singers, musicians and other performers, some even traditional treasures. And all clapped the same simple rhythm to each other and to the people on the bridges: clap clap, clap clap, clap clap.... clap! It all contributed to very festive mood with a lot of calling out and merriment.
The river banks were lined by many yatai (food stands) with all kinds of junk food: karaage, takoyaki, okonomiyaki, Wiener wursten, frozen bananas, cream puffs and some even had fresh fruit or cucumbers. All the traditional Japanese festival food was there and also the little games for kids to play. To my excitement many girls came in the colourful summer dress of Japan, a yukata. It seems Osaka is trying to encourage visitors and inhabitants of Osaka to wear yukata and kimono more often, to enhance the attractiveness of the city. Well, it works for me!
Email ThisBlogThis!Share to TwitterShare to FacebookShare to Pinterest
Labels: event, fun, Osaka, performance