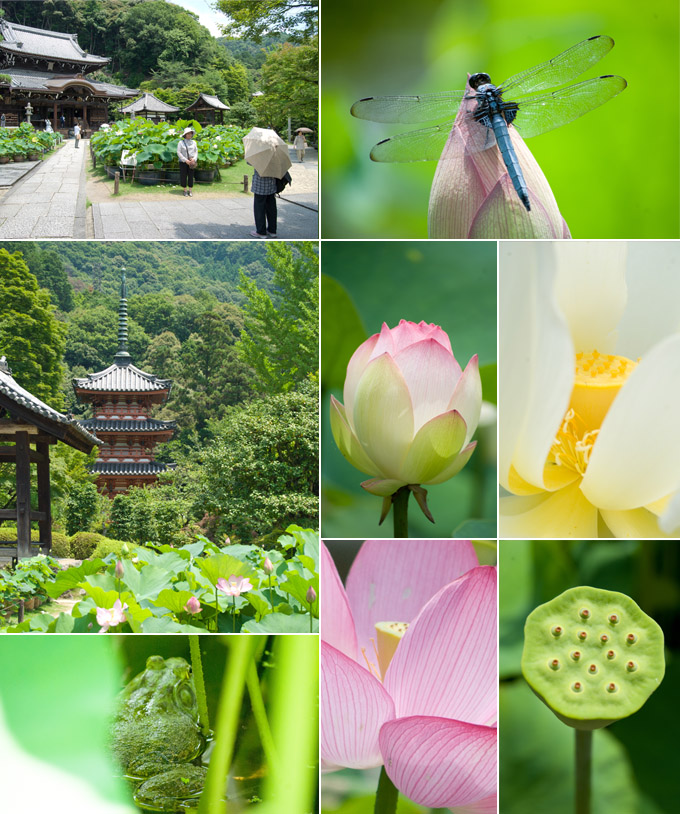 If you follow this blog for a bit you might know I'm sort of a flower-buff! In an earlier article I wrote about Ajisai, or Hydrangea, the flower of early summer. The Sanzen-in at Ohara, as well as Mimurotoji in Uji are famous places to see Ajisai. But, when the hydragea's power is wilting it gives way to another star in the flower kingdom, the Lotus. A very important flower in Buddhist religion, it's no wonder Buddhist temple Mimuroto is one of the best places to contemplate this iconic flower. Mimurotoji however, does not exactly sport that natural flower pond, which you would expect. But the square in front of the temple contains some oblong cement basins surrounded by big flower pots all around. It is not as natural an environment as one might wish for, but through the abundance and the beauty of the many blooming pink and white lotus flowers, it is one of the best picks indeed. Not to mention the hugely impressive bull frogs or amazingly beautiful big dragon flies! I never heard the sound of a bull frog before, let alone seen one. So when I heard one calling out from between the lotus leaves it gave me quite a scare for a second. When I realised that is was a bull frog, I was completely fascinated. It's a sound you should really hear, or even 'experience', at least once in a lifetime!

The good thing about the solution with the flower pots is that you can get up close and personal with the flowers and study them from every side. It's intriguing to examine the beautiful lotus from this close. Their hearts are tremendously interesting, it's almost sensual how they are created to attract insects. 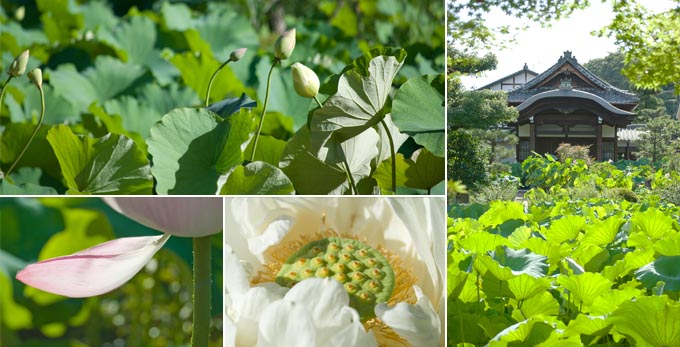 After visiting Mimurotoji on July 9th, I wanted to see more of the queen amongst the flowers. So I planned for a trip to Houkongouin, in the west of Kyoto. The grounds of the Hōkongō temple are quite a bit smaller than of the Mimurotoji and are located in a rural area. What immediately stands out when entering the garden is the utterly ugly building, towering over the green fence of trees. A sore to the eye unfortunately. But when you succeed in ignoring this monstrosity you will find that 'natural' flower pond in front of the temple. And it's completely taken over by the huge leaves of the Lotus flower. Indeed, regrettably there were almost only leaves to admire. It must be a pretty great sight when the lotus flowers, but now I could only find one or two in bloom. There were also a few flower buds, but nowhere near of coming to blossom.

I understand that the Lotus has it's flowering peak around the first week of July and blooms till the end of August. So I thought I was right(ish) on time when I was visiting on July 18th. Maybe the pond gets a second peak period when the flower buds I've seen get to blossom. The garden however is rather charming, and has more to offer. For instance tiny waterlillies in their little basins and also Hydrangea (at their prime around the half of June). Otherwise it's not the most interesting temple in Kyoto. Which might be truly unfair, because Kyoto knows so many temples and shrines, it's hard to compete! 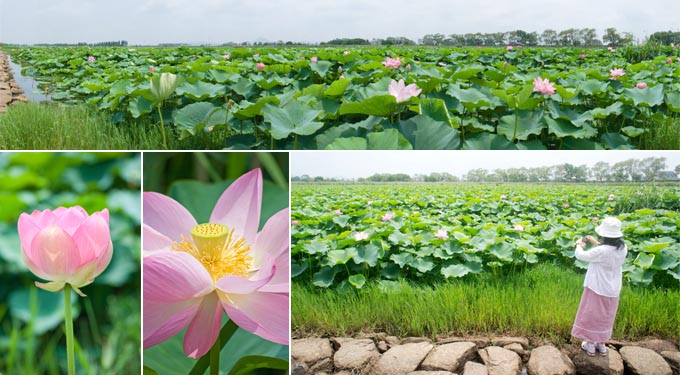 Knowing that the Lotus would probably be over it's prime, was it maybe a tad risky to take another Lotus trip? Perhaps, but I am glad I did. This time on July 23rd and the location was Mizunomori. Mizunomori is an 'aquapark' as they call it. A botanical garden, right next to an inlet of Biwa Lake, in the vicinity of Kusatsu and Otsu. You don't actually have to enter the garden to see the Lotus field in Biwa Lake, but why wouldn't you? It's a pleasant garden with a an abundance of flowers, specially the small types of multi coloured water lillies are really nice to see. Have a stroll through the garden en then exit at the back to see the Lotus field in the lake (You can re-enter Mizunomori). Indeed, a big part of the Lotus field was without flowers, but a good part on the east side was still blooming beautifully. It would have been a hugely impressive sight had the whole field been in bloom, but I was completely satisfied I had the chance to see it as it was.

Tip: The bus from Kusatsu drives up and down in 30 minutes to Mizunomori only once an hour.  Keep this in mind when taking the train, so you don't miss the buss by a minute or two (guess who did). Both the station square and Mizunomori have a cafe, so lunch and drinks are no problem.  Take the same bus frequency in consideration for Mimurotoji in Uji, although you have to time your trip there even better, because there are no cafes near the temple.
Email ThisBlogThis!Share to TwitterShare to FacebookShare to Pinterest
Labels: flowers, Kyoto, nature, parks and gardens, temples and shrines, traditional Japan, Uji