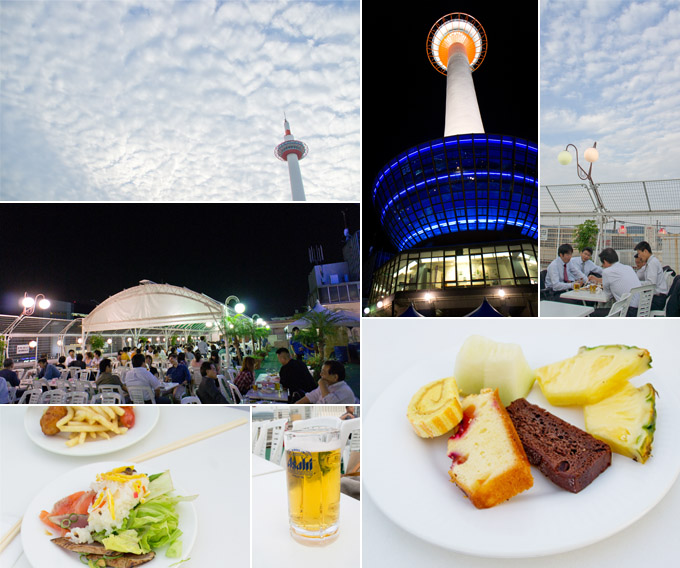 June 1st I wrote a post about New Hankyu's Beer Garden. Last week I went up to the roof garden of Kyoto Tower to make a comparison. (What one has to endure to write a blog!) This is what I found after thorough research:
The food was much better, more choice, more taste and it was even better to look at. For mains and side dished there was so much to choose from, like fresh salmon and seared tuna, a whole range of kushi and fried dishes, rice and noodles, mini sandwiches, fries and Wieners and so forth. I could stuff myself on the fruit and cake bar only! Food might still be better at a regular restaurant, but those do not have Kyoto Tower, or a roof top for that matter!

Another great asset was the roof top awning, because the evenings in Kyoto can still be very hot. Eating in the blistering sun, and drinking for that matter, is no fun! Luckily I didn't need it, I had wonderful weather, actually just perfect, and look at that beautiful sky....

Ok, moving on. The third reason Kyoto Tower might be a better choice is just plain money. Kyoto Tower's Beer Garden will set you back 'only' 3000 yen and you eat and drink as much as you like between 17:30 and 21:00 o'clock. This price is valid until July first, after that, it's 3500 yen till September 1st. Then it's 3000 yen again. Kyoto Tower Beer Garden however does not make a difference between men and women. New Hankyu does make that difference and has an intricate table with prices going up every month, but being less expensive on certain weekdays. Men pay 500 yen more than women on any day. More info on their website.

The thing that could be said for New Hankyu however is the atmosphere. It's quite different since you'll be amongst business men, or as they are called in Japan 'salarymen'. It makes you feel more being a part of Kyoto's community. As for Kyoto Tower, it seems like it gets frequented by more tourists and there were definitely less ties and jackets. The latter could also be the result of 'Cool Biz' season starting, later turning into 'Super Cool Biz', where salarymen are allowed to wear more casual clothes because of the sweltering heat. (See Huffington Post).

I would say 'forget about New Hankyu Hotel's B-B Paradise! Join me at Kyoto Tower Beer Garden and keep off the cakes please!'
Email ThisBlogThis!Share to TwitterShare to FacebookShare to Pinterest
Labels: eating and drinking, event, fun, Kyoto