Catching Kingfisher 'in the wild' 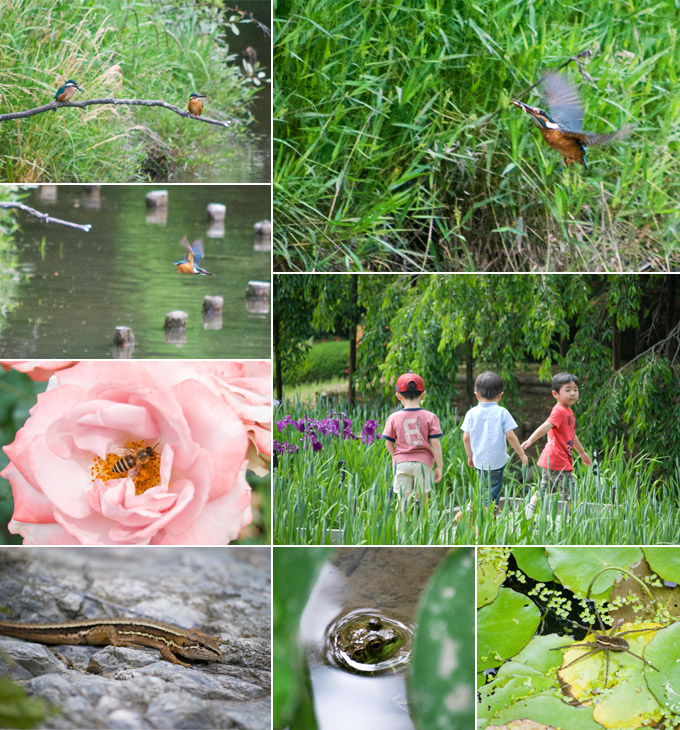 Even is you're not a fervent bird watcher, one can only be in awe of the beauty of this little one. And in Kyoto you only have to take a subway ride to see them 'in the wild'. Kyoto's Botanical Garden is obviously favorited by the colourful birds with their big head and long bill. When I reached the Nakaragi pond, two Kingfisher were flying on and of, catching small fish in flight. I approached carefully though. Another photographer, looking very serious, was aiming for them already. My presence with a meager 200mm lens was condoned however when I showed proper respect and kept quiet.

It seems this spot at the Kyoto Botanical Garden is well known amongst Kingfisher enthusiasts. When I went back a few days later I found not only one, but three photographers with huge camera's. One was as long as my arm and had a lens as big as my face! This one even had a sticker of the Kingfisher on his camera. After some time waiting together at the rainy pond with a gaijin woman in their midst  the three relaxed a bit and began showing me their pictures of the Kingfisher on their camera. Obviously beautiful pictures! Well, I could only show them mine, didn't I?! So, I showed them the picture above and I think they were a little impressed that I succeeded with my very small, unimpressive camera. At least it was Nikon, a Japanese brand! We waited some more, but the rain was maybe too heavy, the Kingfisher did not show itself.

Kyoto's Botanical Garden should be one of the most beautiful ones of Japan. Actually, I hope this is not true. The expansive grounds measuring 240,000 m2 might be a bit too much work for the gardeners. At the entrance I got a cold welcome with big lawns of concrete. After that I couldn't find the immaculate tidiness, which Japan is so famous for, anywhere in the garden. Even Wikipedia sums up 'well-tended' in the first sentence about botanical gardens, so not too much to expect.
Although there is beauty to be found. For instance the Ume (Plum) grove, the Japanese Iris garden and the Nakaragi pond are great. I expect the Lotus pond to be amzing when it is in bloom, or earlier in the year when it is lined with blossoming cherry trees. The Japanese style garden however was non-existent (!) and the Japanese Native Plants garden looked like it was forgotten for about a few years as well as the 'exhibition' of bonsai trees… Rather strange for a botanical garden in Japan.

The Kyoto Botanical Garden however lies in a nice neighbourhood, at Kitayama subway station. And it's only 200 yen, so there's nothing to loose (The conservatory is another 200 yen). You can also take a stroll along the beautiful Kamo river or take lunch at one of the various cafe's opposite the Kitayama Gate.
Email ThisBlogThis!Share to TwitterShare to FacebookShare to Pinterest
Labels: flowers, Kyoto, nature, parks and gardens