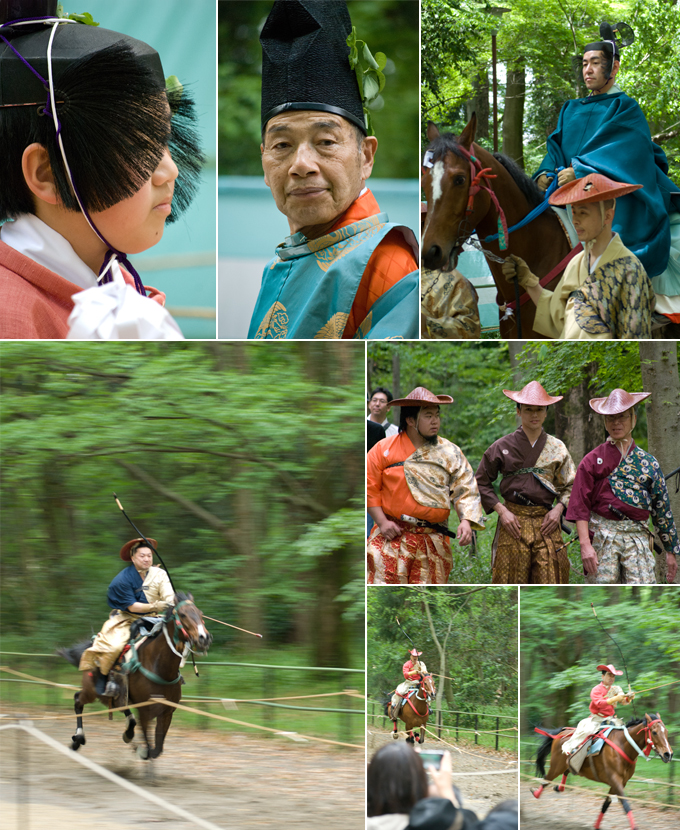 The first week of April is called the 'Golden Week'. It got it's name from the fact that this week Japan experiences the highest peak in commerce, because supposedly 127 million Japanese get to have the week of. There are already 4 national holiday's during this week, and why not take an extra day or two and have a whole week of freedom? So a Golden Week it is, for retailers, as well as holiday makers. And there's plenty of events to choose from where to spend your time (and money).

On May 3th I went to see a very spectacular event at the Shimogamo Shrine in Kyoto, where very brave men perform archery on horseback called Yabusame. The ritual can be dated back to 300 BC. The event on May 3th is part of a period of the Aoi Matsuri (Hollyhock festival) that lasts two weeks. To watch this actual event, one need a liberal dose of patience, but it get's rewarded generously also. If you would like to visit this event next year, get there at 11:30 a.m. (the event starts at 1 a.m.) and queue for a ticket. If you don't want to stand for 3 to 4 hours, first to get a good spot and then through the whole event, you have to get there early. First all officials and archers ride past the spectators a few times. This takes a while, but when the ceremony is done, the actual spectacle starts. There are three targets where the archers aim their arrows, so it's even nicer to sit directly in front of one of those. Not without danger to oneself though! The space between the mounted archers and the spectators is a mere 3 to 4 meters. The archers shout an impressive 'In-Yo-In-Yo!', darkness and light, and thunder past on their horses at high speed, mud flying everywhere!

It was very clear how terribly dangerous and difficult this ritual actually is. Not very often all three targets on the 255 meter long track were hit by an archer. To hit all three is therefore considered an admirable accomplishment. But hitting the targets is not the only concern of the archers. One of them, aiming for the second target, fell from his horse at full speed! In shock I totally forgot my camera and was very happy to see he stood in just seconds and walked. He even got back on his horse and did another few runs! He was a bit disheveled, but he was the hero of the day. To be selected as a Yabusame archer is a great honor and he did right to his status. The other archers did have quite a bit of difficulty hitting the targets also, but when they did, it was under loud cheers.
Around 800 years ago, mounted archery was used to train samurai and keep them prepared for war and the archers who performed poorly could be ordered to commit seppuku (known as ritualistic suicide)! And dogs should also be grateful, since it was common to use them as a target first... Just as well it's 2012!
Email ThisBlogThis!Share to TwitterShare to FacebookShare to Pinterest
Labels: Kyoto, matsuri and festivals, performance, temples and shrines, traditional Japan