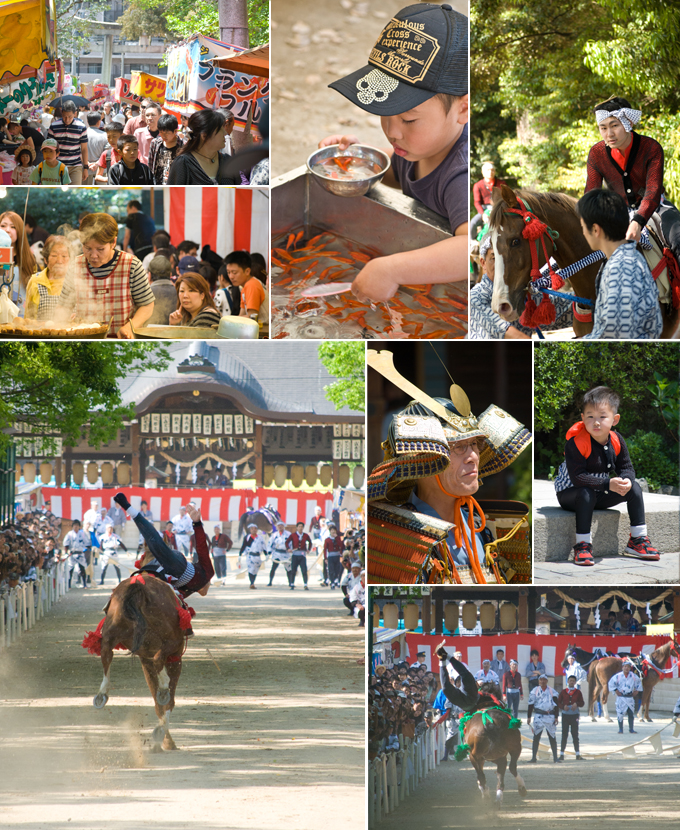 Aoi festival part II, Children's Day on May 5th. This time a little way of the beaten path, I visited Fujinomori Shrine as part of the Aoi festival celebrations. Fujinomori Shrine is over 1200 years old, so it was built even before Kyoto became the Imperial capital in 794. The deity of the shrine is connected with military arts and war. Members of the imperial family and leading samurai warriors have always worshiped at this shrine.

Surprisingly a completely different atmosphere is present today. The visitors of Fujinomori in Fushimi Ward are very much the 'ordinary' man and woman, and child so to speak. May 5th is Children's Day after all. Therefore lot's of game and play for the little ones. Like target shooting, playing with goldfish, turtoises and crabs, to take home whatever you can grab. Not the average kid's entertainment in the Netherlands and I'm happy for it. The rest of the amusement was all very responsible and fun. All kinds of food stalls didn't miss on the premises, it is Japan after all. The whole set up gave it a bit of a carnivalesque feel and with it's absolutely great weather is was a fun day 'in the south'.

May 5th is also known as Boy's Day (March 3th historically became Girls Day). Weeks before Boy's Day streamers in the form of a carp, koinobori, can be seen throughout Japan. The bigger the carp, the older the son. Carp are a popular Japanese symbol because they are admired for strength and their determination to swim upstream. These qualities are what parents hope for in their children.

Boy's Day is celebrated at Fujinomori Shrine with a festival called Kakeuma Shinji or Fukakusa Matsuri. Spectacular stunts are shown while riding a horse, techniques deriving from the battlefield of samurai. Samurai in their day had to be able to ride their horse through enemy country, but also try not to get shot! Well, why not hang yourself by the side of your horse, stand on it's back on your head or sit backwards on it so you can shoot arrows at your pursuers. Where Shimogamo Shrine showed Yabusame Umashinji earlier in the week (shooting arrows from horseback), this time it was about the acrobatic moves. I'm glad they don't combine the two nowadays, because also this ritual is not without danger. The last horseback rider at Fujinomori fell while performing his last trick. And this time the rider did not stand up. Up till now I'm not sure how he's doing. It is not something unheard of, participants or spectators getting hurt or even dying during the performance of a ritual stint. So whatever you do at times visiting a spectacular festival, personally I would advise not to take the front row...
Email ThisBlogThis!Share to TwitterShare to FacebookShare to Pinterest
Labels: Kyoto, matsuri and festivals, performance, temples and shrines, traditional Japan