Shodō, the Way of Writing 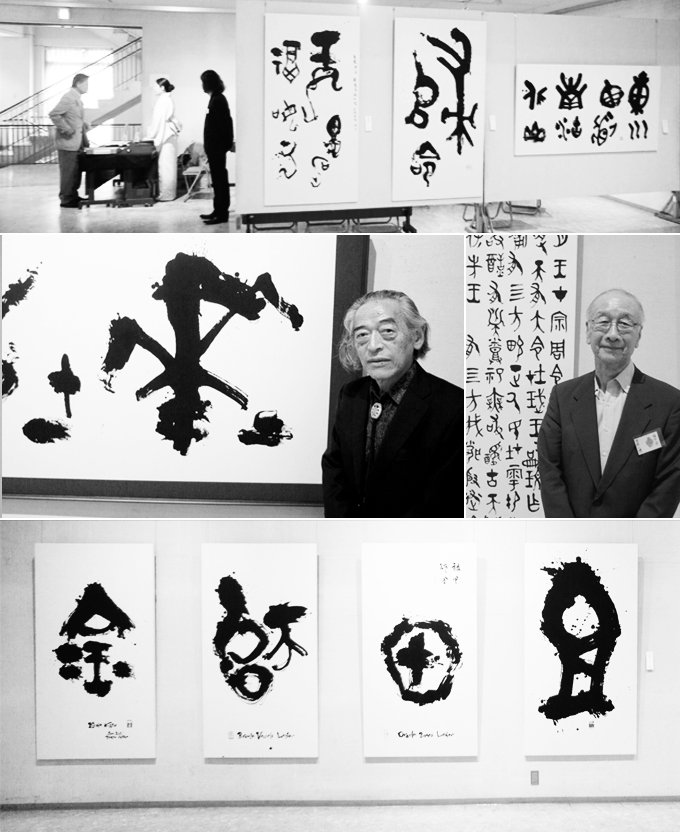 Shodō literally means 'the way of writing' in Japanese. And this ancient Japanese calligraphic art has it's roots in China. Because still today kanji (the Japanese characters) used in Japan are the same as the characters in China. They only sound different.
The Japanese have three alphabets today, hiragana, katakana and kanji. Hiragana is a simplified script that is used to write every 'sound' and there are 48 of those characters. Katakana resemble hiragana, but are used to write words that stem from other languages. There are 51 katakana characters. Kanji however indeed depict whole concepts sometimes and had a long way to evolve from their origin 8000 years ago. Chinese characters came to Japan in 57 AD. You need to learn 2000 to 4000 kanji to be 'literate' in Japan. Which means you can read the newspaper. There are however, tens of thousands of Chinese characters in existence.

If you look at the older scripts from China, you can see they're actual drawings. And this is what Shodō masters do, taking the oldest found scriptures, written in bones or bronze vases and 'copy' those and make them into an art form. You could rather say Shodō artists 'interpret' the scriptures, like classical music is interpreted by master musicians.

To learn Shodō, an apprentice starts imitating the master. At school children still learn Shodō and do this by imitating the scriptures in the Shodo textbook. Taking Shodō lessons means imitating the sensei's (teacher's) work. Advanced artists imitate the works of famous Shodō artists from centuries ago. Artist first master the imitating and then add their own creativity.

Visiting the Shodō exhibition of the Tokyo based Kikkokai Group, lead by Shodō master Koho Kato, was a great experience. (Kato san is seen on the picture left, also in front of his own work.) The works were all explained to me in English by a very friendly member and artist, mr. Issei Joshihara. He was exhibiting his own work also, and is seen on the photo (right) in front of a fragment of an ancient Chinese scripture made in bronze hundreds of years old. I have a great esteem for Shodō and it's masters. Being very interested in typography because of my graphic design background, Shodō is the ultimate expression and source of knowledge and artistry in my opion.

The Kikkokai Group exhibited for the first time in Kyoto, at the Kyoto Prefectural Centre for Art and Culture. I was very impressed and felt lucky to have found the exposition! The time unfortunately is short, just a week, but a Golden Week!
Email ThisBlogThis!Share to TwitterShare to FacebookShare to Pinterest
Labels: art, Kyoto, museum, traditional Japan