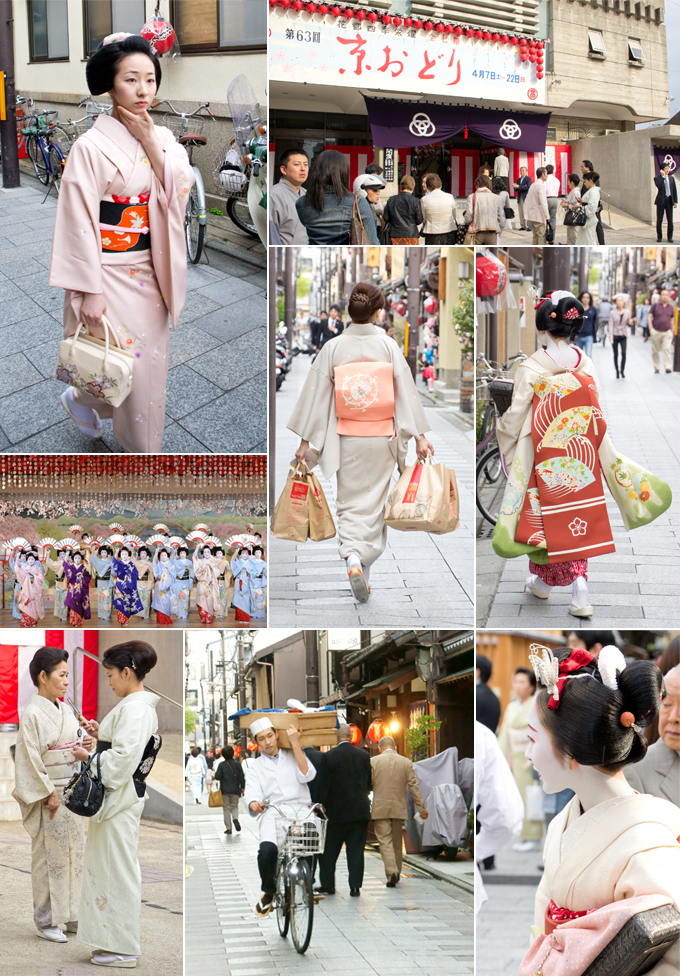 Kyoto knows five geisha districts, namely Miyagawa-cho Kabu-kai, Ponto-cho Hanamachi, Gion Kobu, Gion Higashi Kabu-kai and Kamishichiken Kabu-kai. Geisha are formally called, geiko and apprentice geiko are called maiko. Each one of these districts in Kyoto have their own theatre where geiko and maiko perform their elegant dances every year. Four of the performances are held in spring, one in the fall.

At none of the stages it is allowed to take pictures unfortunately. But outside the theaters, in the geisha districts, there are enough chances to see maiko and geiko rushing to and from the theatre. You must be quick though, most are in a rush and are not really inclined to stand still for long. They are working of course, so don't try to stop them for your convenience of taking their picture (as many tourist would like to or maybe tries). If you are lucky some maiko and geiko attend the theatre as spectators themselves and meet friends or acquaintances in front of the theatre where you can snap them more easily, if you like to do so.

Dance performance at Miyagawacho Kabu-kai
The picture's above were taken at geisha district Miyagawacho Kabu-kai. The one picture of the stage is from "Kyoto Visitors Guide'. The spring dance of Miyagawacho is called the "Kyo Odori" (Kyoto Dance). The first performance was held in 1950 and enjoyed great popularity since then. After the fifth performance the stage was moved temporarily, but in 1969 the new Miyagawa-cho Kaburen-jo Theater was completed and the dance returned to its original location.

The dance is preformed only in the first two weeks of april. Tickets are quite easily obtained from the ticket office in front of the theatre. If you get there early in the morning to buy the tickets, you have more choice where to sit. The performance shows famous places and stories of Kyoto as a background. Traditional music will be played live on stage by the musicians. Not only dance, but some theatre, or musical-like performance, will be shown as well. Even some of the performers will dress up as men to play the roles necessary for the story. Which is a comical and strange sight knowing a very elegant and sophisticated girl is underneath the 'pomp' and 'swagger' the role of men ask for. The best part of the show is the end dance where every performer comes on stage and they dance all together in their colorful kimono using fans to emphasize their elegant movements.

Dance performance at Ponto-cho Hanamachi
The dance is called Kamogawa Odori (Kamo River Dance) and started in 1872 as part of the Kyoto Exposition. It has been performed annually since and provides a show with a wide range of fans. This is the last spring dance event, from May 1st -24th. So there is still a week to attend it this year!

Dance performance at Gion Kobu
The First performance, called Miyako Odori (Dance of the Capital), was held in 1872 to  the Exhibition for the Promotion of Domestic Industry. Kyoto struggled hard after the capitol of Japan was moved to Tokyo in 1869. Although the performance has a long history, each year the dance is different and this has made it very popular. Held from April 1st - 30th.

Dance performance at Gion Higashi Kabu-kai
The dance is simply called Gion Odori (Gion Dance) and was first performed in 1953. The dance is known for for its original planning and composition. This performance is the only one in autumn and held from November 1st - 10th.

Dance performance at Kamishichiken Kabu-kai
The performance is called Kitano Odori (Kitano Dance) and officially begun 1952. The Kitano Club and the Mando Club danced jointly in commemoration of the 1050th anniversary of Kitano Tenman-gu Shrine. It is known to be both elite and tasteful. Held from April 15th - 25th.
Email ThisBlogThis!Share to TwitterShare to FacebookShare to Pinterest
Labels: architecture, art, dance, eating and drinking, fun, Kyoto, performance, traditional Japan