Manga Museum exhibits 'Magnitude Zero: March 11 seen through the eyes of comic artists from all over the world' 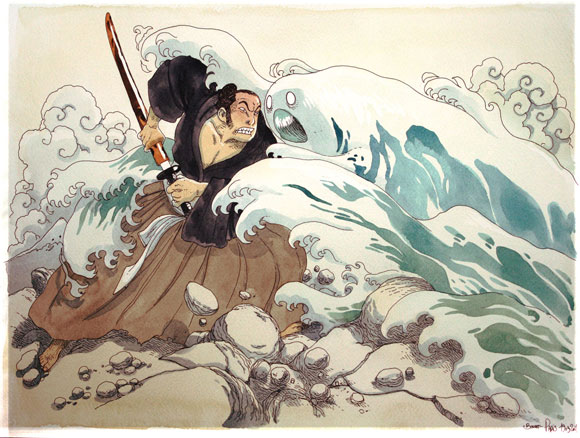 Jean-David Morvan, a comic artist from France, had just visited Japan for the International Manga Awards. Back in France he had to learn from the news that a three fold disaster struck the country he came to be so fond of.

Immediately after he learned the terrible news he started 'Tsunami'. A project in which comic artists from over the world bundle their talent and skills to raise money for a relief fund for the victims of 11.03.11. Thousands of artists and illustrators responded by sending their original works to help Japan. Fifty of those original art works were auctioned and brought in 30.000 euro for the relief fund. Also 250 illustrations were selected for a book called 'Magnitude 9' which was published in September 2011. Already 4000 copies are sold today.

From March 3 to May 6 (2012) the Manga Museum at Kyoto exhibits a number of 120 illustrations from the Tsunami project called 'Magnitude 0'. The zero signifies Japan's northern region starting from 'scratch'.

Of course I've seen and read, the shocking and sad stories and video's from the victims of the Tohoku region. And now we see them again, just as shocking and heartbreaking, since the first anniversary is just a few days ago. I was deeply moved and impressed by the exhibition 'Magnitude 0' at the Manga Museum yesterday. It broke my heart to see, so graphically told, that even so soon after it happened, the Japanese people began to mend what was mendable. Helped by each other, but also strengthened by the hart felt messages and help from other countries, they will continue to rebuild their lives again.

If you have the chance, visit the Kyoto International Manga Museum. If you don't have the opportunity, here's a link to the Magnitude 9 website, for more awe-inspiring art work.

The image that illustrates this article is by the very kind mr. Boulet (France). Merci beaucoup monsieur Boulet!