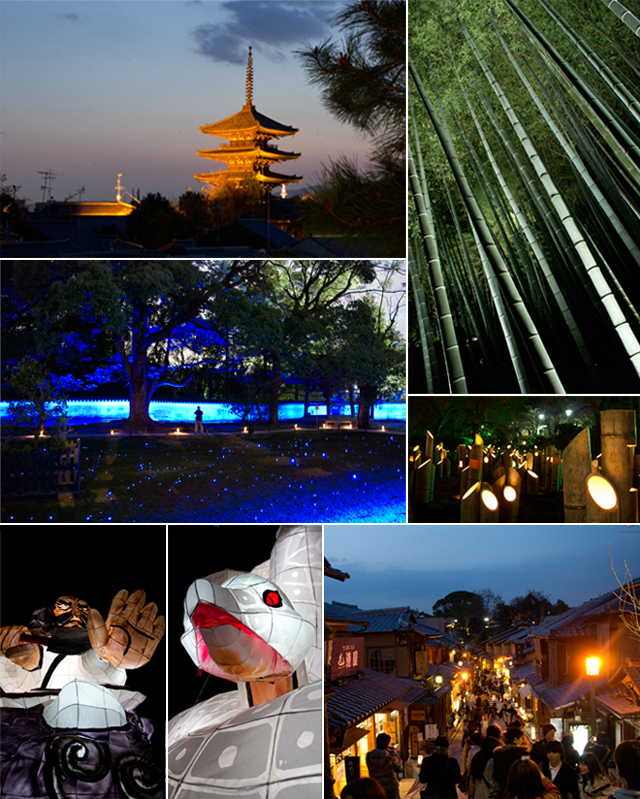 Higashiyama is a traditional neighborhood breathing culture and history since the 14th century. It surrounds the famous temple of Kiyomizu dera and the Shoren-in temple at he eastern side of Kyoto. Every year a Light festival, called Hanatouro, is organized, this year celebrating it's 10th anniversary.

From March10th till March 20th, thousands of tourists enjoy the famous 5 km long route lined with approximately 2400 lanterns and large ikebana displays (Japanese flower arrangements). Many of the temples and shrines along the route invite you for their evening openings to watch special light displays. There is so much to see, one evening would not be enough to see it all. I expected long lines of waiting tourists at the temples, but the 'touro' seems to spread out so far, it can contain all those couples in love, families, photographers(!) and other visitors easily. I visited two temples and their gardens and one light show and didn't have to wait more than two minutes each time.

First I paid the Shoren-in temple a visit, founded in the 12th century, which has a beautiful garden with waterfall, bamboo grove and amazing buildings on the premises. In the garden tiny little blue lights turned on and of every few minutes, just like fireflies. Beautiful!

The second visit was to the Yuzen-en garden of the Chion-in temple. A huge temple complex, with a lovely little garden with a great karesansui (dry rock garden), modestly illuminated. Surprisingly, after a visit to this sacred place that was established some 700 years ago, each visitor gets complimentary Mc Donald's vouchers at the exit! What a strong contrast. :)

The most amazing show I've seen was beamed on the San-mon Gate (built in 1619), leading to the Chion-in temple. An almost 12 minute long light show made use of the intricate pattern of the huge gate which is 24 metres high and 50 metres wide. Colour patterns, lines, birds and other creatures moved over the immensely huge gate with such splendor, it was absolutely mesmerizing and and amazing end to a magnificent evening.
Email ThisBlogThis!Share to TwitterShare to FacebookShare to Pinterest
Labels: event, flowers, Kyoto, parks and gardens, temples and shrines, traditional Japan