Bonsai in Japan, the best of the very best 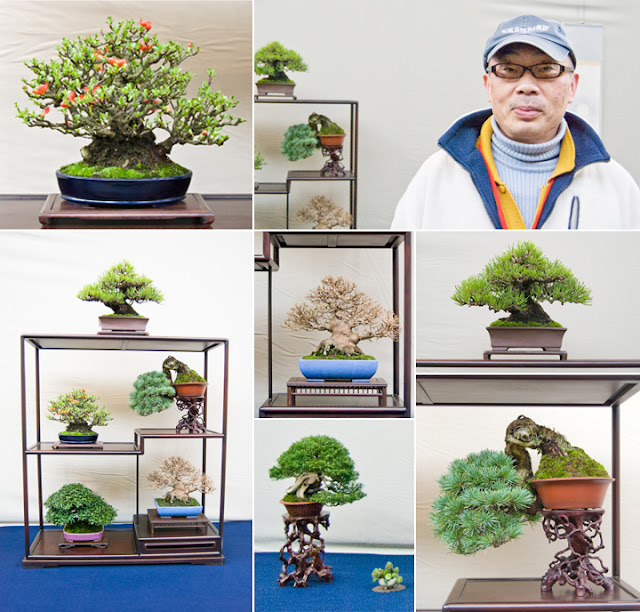 This weekend, I have been told, Japan showed the best of the very best Bonsai trees at the Shohin Bonsai Fair (Shunga-ten or 春雅展). It is a yearly exhibition, held in Osaka at the end of March in the Mizu no Yakata dome.

As I was seeing quite some trees without leaves, I tried to investigate why the 'All Japan Shohin-Bonsai Association' (AJSBA) chose to exhibit such exquisite specimen not a little later in the year, when all the trees would have their leafs? The very kind Mr. Simmons, bonsai student and whom I met at the Fair, was happy and patient to give me a quick masterclass at the premises (my gratitude Mr. Simmons!).
So why March? Well, that one was the easiest; all deciduous trees should be exhibited without their leafs, because at that moment their form, the stalk and the branches, can be appreciated at their best. Which would be less easy if the trees are shown with their full foliage.

Another thing I learned is that bonsai have three 'classes'. These Shohin trees fall in the middle class and are 20 centimeters high. Sometimes they are 25 cm high, but these trees are only accepted if they are from a very high quality. The smallest group is called Mame Bonsai and these trees are not bigger than 12 centimeters. The biggest class of bonsai is called Chuhin.

The next thing that made me curious were the white 'dead' branches I saw protruding from the pine trees exhibited. You see an example of this at the bottom picture in the middle. These white parts are called shari (if the stem of the tree is intended) or jin (if the branches are intended). Shari and jin depict the bones of Buddha and make the tree seem very old. Because that's what's it all about for the bonsai grower and viewer of this art form.
Another sign that a tree is (or seems) very old is moss on the bed of the container and specially on the base of the tree (nebari) and the bark. Also, a crackled and grayish bark on the stem is of high value. And all this comes with decades of preening and patience, a few generations of patience even. Some of the trees at this exhibition were over a hundred years old and are passed on from grandfather to father to son.

Most of the trees did not have any wire showing, or other devices to keep the branches in place. This means that most of the trees were 'finished'. So the stem and all the branches of these trees have their perfect form and are 'only' to be contained this way. But that sounds easier said than done. Even keeping a tree in it's intended shape after it's finished is hard work an needs constant attention. I might add that some trees did show wire and thus had not yet reached their intended form. This is something that can also be appreciated as part of the art form. An art that is now a thousand years old already.

Since taking pictures is strictly prohibited, you should actually try and take a look yourself. The proud grower, in the picture, was very friendly and let me take a photo of his bonsai trees, and no doubt decades of hard work. His name is Hidehiko Nitta (ありがとうNitta san!). Also want to 'meet and great' and enjoy the best bonsai Japan has to offer? Maybe see you next year!
Email ThisBlogThis!Share to TwitterShare to FacebookShare to Pinterest
Labels: art, event, Osaka, traditional Japan