Milky Way on water: 50.000 LED lights on the Okawa river in Osaka 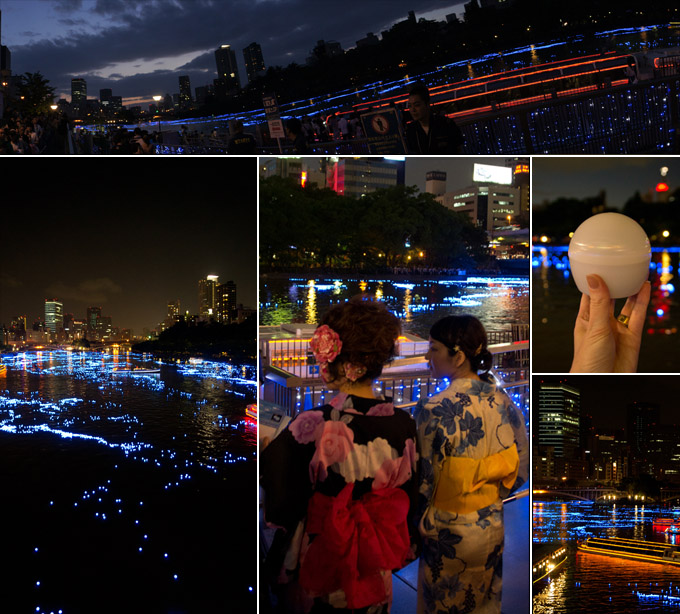 It was just pure luck I found this festival just in time to watch and even participate. A beautiful picture of lasts years spectacle in Osaka caught my eye just one day before the event. It made me think of the Panasonic LED 'fireflies' released in the Sumida river in Tokyo just a few months before. I wished then I could have seen the spectacle, so am I happy to have found this opportunity! So I rushed my behind on the Special Rapid Service to Osaka this Saturday.

Arriving there I watched 50,000 blue lights make a dreamlike landscape on the Okawa River. The blue lights even have a fairy tale name and are called inori-boshi (prayer star). Plus they all have a wish attached to them, which were written on paper strips people could buy at different shops in Osaka in the weeks previous to the event. Wishes are made for happiness, money or health, but also condolences for lost loved ones or people suffering in the Tohoku area. With this man-made Milky Way of lights, the star festival is celebrated, or “Heisei, the Legend of Osaka Amanogawa”.

Thousands of people visited the riverside to enjoy the one-night-only Milky Way. Most of the lights were gathered beforehand and released from small boats, by the organization. A little haphazard and a tad disorganized, it all contributed to the charm of the evening. Visitors could also embark one of the tourist boats (for 2000 yen) and get a 'wish star' to release in the river themselves. The embarking on different boats brought about quite some confusion, certainly for one who doesn't speak Japanese! But a friendly attendant is never far away, so it all worked out well in the end and I did not miss my boat (I'm on a boat!). I would have preferred to enter a open boat though, but that's probably for another life time, when I do speak Japanese and understand what the heck is happening. :)

All of this does not occur without thinking of the environment I'm relieved to report. The wishes are written on paper strips made of papyrus. This paper is made mainly from reeds which grow in Lake Biwa, north of Kyoto. Releasing these papyrus strips in the river helps to purify the water is what I understand. Even only one paper strip will purify approximately 54 liters of water! Of course the LED lights, that have a low electricity consumption, are gathered after the festival and reused. Hurray for Osaka's Milky Way Festival!

Here's a link to the article about the event in Tokyo.
Email ThisBlogThis!Share to TwitterShare to FacebookShare to Pinterest
Labels: event, matsuri and festivals, Osaka