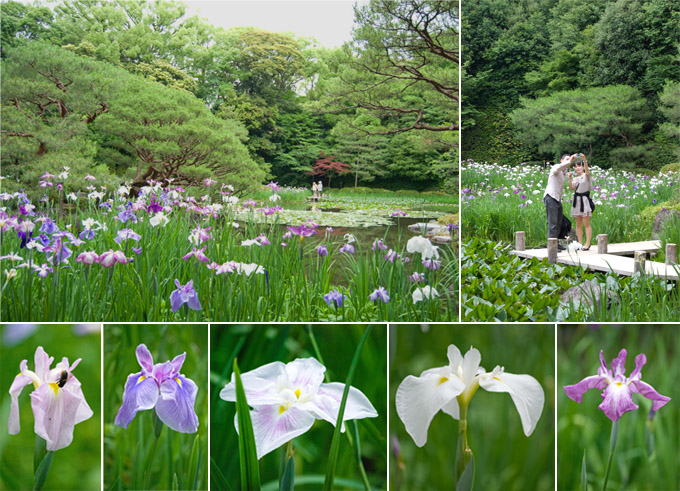 As promised in my May article about 'iris viewing' I returned to the Heian Jinja Shrine garden this month. At exactly June 15th, as the gardener at the shrine promised the irises would be 'ichi ban' (the best). And he was right, it was a feast for the eyes. In June the rabbit-ear iris, kakitsubata, might have wilted but now it is time for hanashobu. Hanashobu is the Japanese name for the Japanese iris, a flower family that knows over 2000 cultivars! The iris might not be as popular as the cherry blossoms (sakura) in Japan, but the 200 gardens in this country displaying the iris get visited by two million iris-enthusiasts each year.

For the Japanese, nature is very important, even though they might transport nature to the indoors. Iris displays for viewing purposes is a seasonal past time in Japan. Irises in pots are displayed along the walls and some specimen are even displayed in the tokonoma. The tokonoma is the most important space in a traditional Japanese home. It's an alcove with a raised dais where special objects of art are displayed. These can be scrolls, figurines, and often ikebana arrangements or sometimes bonsai, thus also seasonal flowers like hanashobu.

The root that nature and the seasons are as important for the Japanese lies in their upbringing of the naturalistic Shinto religion that every (living) thing has it's own kami. A kami is a god in Japanese, for Shinto knows not one god, but many. Even though not all Japanese practice Shinto and many mix Shinto rituals with Buddhist religion, every Japanese person is brought up with the belief that every object and even phenomena have a spirit. A wonderful thing that is easily visible in their respect for nature. (On the other hand the Japanese are infamous for their lack of preserving nature as well, which is one of the many, many contradictions in Japanese society).

Private persons at least show their respect for nature by consequently picking up litter from gardens and any where else they encounter 'nature'. When viewing a display of irises at someone's home, guests kneel and bow, if they appreciate the form of the flower. The Heian Jinja shrine garden has many species to enjoy outside, I think I saw at least ten of them. The three most important varieties are the Edo, Higo and Ise type. Every one of these types displays the unique esthetic senses of the three Japanese regions. The Ise type shows a pendent flower (picture 1 & 2, from left to right). The Edo type shows a horizontal flower (picture 3). The Higo type is arched (picture 4 & 5). Even when one does not know this, the display of different shades of purple, pink and white is magnificent.

PS: I got the best information about hanashobu through this article by Hiroshi Shimizu.
Email ThisBlogThis!Share to TwitterShare to FacebookShare to Pinterest
Labels: flowers, Kyoto, parks and gardens, temples and shrines, traditional Japan