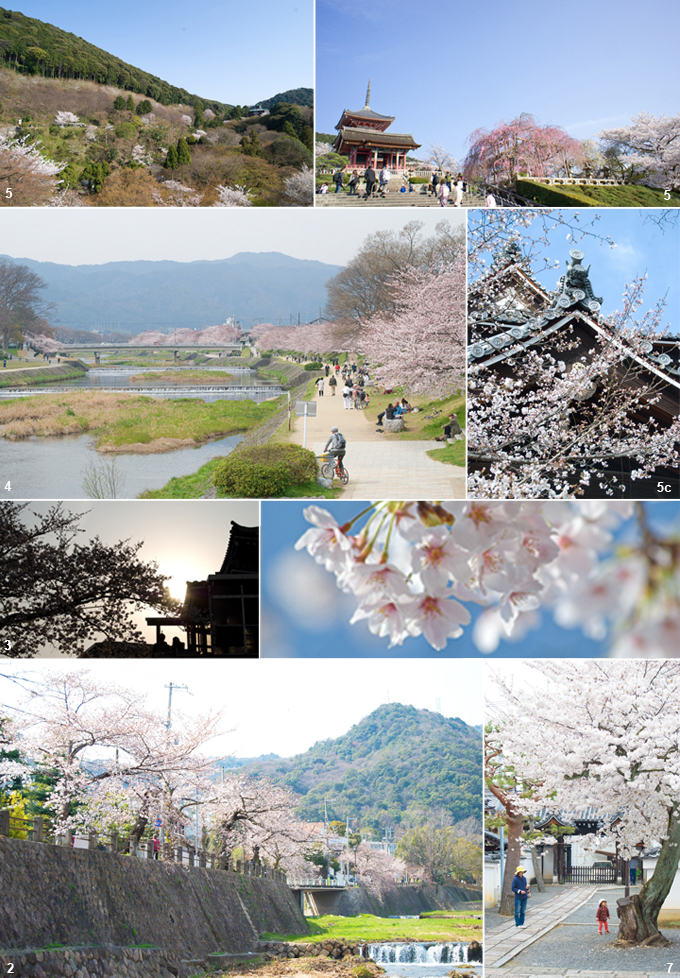 This is the fifth time I'm visiting Japan, but the first time I had the opportunity to really watch the spectacle and metamorphosis of the land and it's people during blossom season. To take it all in, at least I had all the time in the world this year round and made 16 trips to watch this famous spectacle!

And just as well, I took about 400 photo's starting from March 14th when the plum blossom (ume) started blossoming until just yesterday I took some pictures near my home of some late blossoming cherry trees (sakura). And there are still trees that won't give up and spread their wealth of flowers and perfume!

It might seem the blossom season only lasts one week, the first week of April is one of the busiest times in Kyoto most years, but I found the season can take up to eight weeks. Depending on the weather of course and the region you're in. Another fact I was not aware of is that, for instance, Tokyo is way ahead of Kyoto when it comes to the timing of the blossoming trees, although Tokyo lies 465 km (288 mi) farther north. Well, there you go, traveling up from the south of Japan up north to the beat of sakura isn't even all that simple!

During the past six weeks I learned some more about blossoms. It seems 'ume' for the Japanese is not as breathtakingly thrilling as sakura is. As I was informed by a Japanese lady that sakura season was coming up, I enthusiastically showed her the pictures I already took at the Zuishin-in during the Hanezu Odori Dance. She was not impressed, because these showed plum blossom, not cherry blossom. Well, that's one lesson learned. I was indeed a bit surprised by the vigour the Japanese show at seeing one tiny petal of sakura. They immediately flip out their mobile phones or swoop in with whole kitchen steps and professional bags full of lenses to get the right angle. But, I must admit, after a few 'Hanami' trips I am taken by the sakura-fever too! (Hanami literately means 'flower viewing', and than means cherry blossom in Japan as we've learned now). 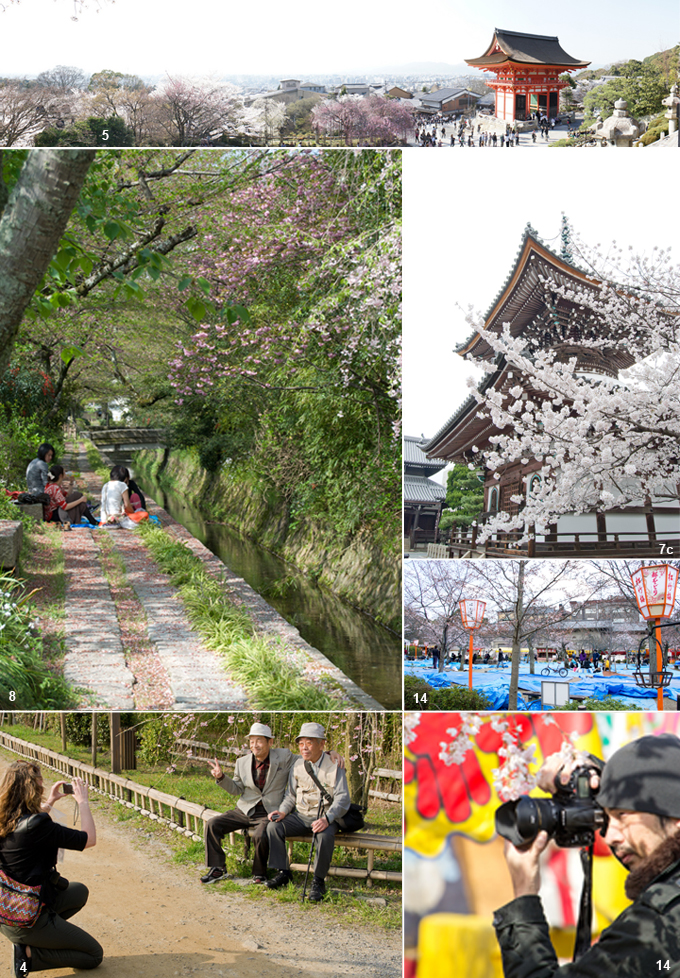 I rated the trips I made by the best blossom viewing:
1. Miho museum in Shiga. I went there two times even, because the first time it was too early for the blossom as it turned out. The second time I got rewarded with a sea of bright pink. The Miho museum strangely enough is not well known, even by the Japanese, so there were almost no other visitors (at 10:00 - 11:00 am). which, in a way is a goo thing when you go blossom viewing! Here's a link to my earlier Miho Museum article. On the way back from the museum (by car) I passed the little town of Ritto and was treated on a wealth of sakura lining the river! (1b)

2. Near Ashiyagawa station at Ashiya, west of Osaka. Tranquility and pleasantness, at the peak of the sakura season. Seat yourself on the grassy banks of the river, and hear the water flow while your eyes are on the sakura and the mountains above. Pure bliss.

3. Along the river between station Shukugawa and Koroen station in Nishinomya, west of Osaka. A wonderful place, a great photo opportunity. However, far more crowded than Ashiya, but very beautiful nonetheless.

4. Along the Kamogawa River, near Kyoto Botanical Garden. An oasis to spend a day and have a picnic, even without sakura! The cherry trees reach as far as the eyes can see, both ways. Note that the darker pink weeping cherry trees, along Nakaragi-no-michi path, blossom a while later in the season.

5. Kiyomizudera and Higashiyama (5b), including San-Mon Gate (5c) in front of Chion-in in Kyoto. The neighbourhood around Kiyomizudera is one of my favorite places to stroll through. There are a lot of easy photo opportunities here, also with lovely kimono clad girls (ask nicely and they pose for you!). Sometimes you even meet maiko-henshin (tourists that are dressed up for the day as maiko, which is an apprentice geisha). Note that Higashiyama is also one of the busiest places in Kyoto, so go really early. The views from Kiyomuzudera over the mountain beneath dotted with sakura trees is beautiful.

6. Zuishin-in in Kyoto (ume blossom), during the Hanezu Odori Dance. The temple is known for it's 'Hanezu Plum Trees', hanezu meaning a light red colour in Japanese. It's one of my favorites , because of the dance event and I happen to love ume. Plus it were the first trees blossoming in Kyoto and has great photo opportunities, also of other photographers! Here's a link to my earlier article about the Zuishin-in Plum Blossom Festival.

7. Honryuji Temple at Kyoto. The perfume these trees radiate is enormous! A very special, quiet place where you'll probably only meet one or two other photographers, even at the peak of the sakura season.

8. Philosophers Path (Tetsugaku no michi) at Kyoto. I went two times as it is one of the most popular spots. As it turned out it is really hard to time well with sakura, because the neighborhood around Philosophers Path was teeming with blossom, the Patch itself was barren, showing a wintery scene. Not much fun. A few weeks later, when I went back, it was a bit too late for sakura. However it is a very pleasant path once the trees have their foliage and I would definitely recommend a stroll on a beautiful day!

9. The north side of Keage (station) at Kyoto. From the old Boat Railway and Lake Biwa Aquaduct Museum, that show many sakura trees. Then take the Shishigatani-dori and feel yourself enveloped by ancient Kyoto with numerous temples along the road, dotted with sakura trees here and there. This road leads to Philosophers Path.

10. Kitano Tenmangu Shrine. An amazing place which I later will make a post about. But I was not there when the sakura was at it's best so I can't really tell about that. But even without sakura the temple complex feels mystical and has an ancient atmosphere, be sure to not miss it while in Kyoto.

11.Tō-ji Temple in Kyoto. I was there during the famous antique market at the end of march. It's my favorite market here, and I was treated on some beautiful ume, but the temple doesn't have many ume trees.This link shows my earlier pictures at Tō-ji Temple. You'd maybe better go during the blossoming of sakura (I haven't been there at the prime time).

12. Kodaji-in at Kyoto. Beautiful garden, specially during the light festival it's worth a visit. But, it has only one sakura tree, so don't expect more than that.

13. Jonan-gu Shrine in Kyoto. Plum tree & Camellia festival. Nice, but challenging photo opportunity. I would advise to go early March, for the Camellia. These and ume do not peak at the same time, so it's difficult to see both at their best.

14. Sakura at Maruyama Park and Yasaka Shrine at Kyoto. This was the biggest disappointment, shock even, of the sakura season! An unparalleled commercial event. It's outrageously popular among the Kyotites for Hanami picnics, taking with them huge amounts of blue plastic and there are loud coloured food stalls everywhere. Yasaka shrine is supposed to be a popular sakura spot, but I thought the sakura was almost non-existent. You better visit Maruyama Park before or after this 'craze' of Hanami picnics.

Apart from the last entry, looking back at these last few eeks, it was all quite impressive! The hardest thing about Hanami was, naturally, that blossom trees don't flower at the same time. And it's very difficult to predict when they are at their best at which location. I found sometimes I was too early and sometimes too late. Ah, nature is unwieldy… I'm keeping my fingers crossed I can 'Hanami' another time! 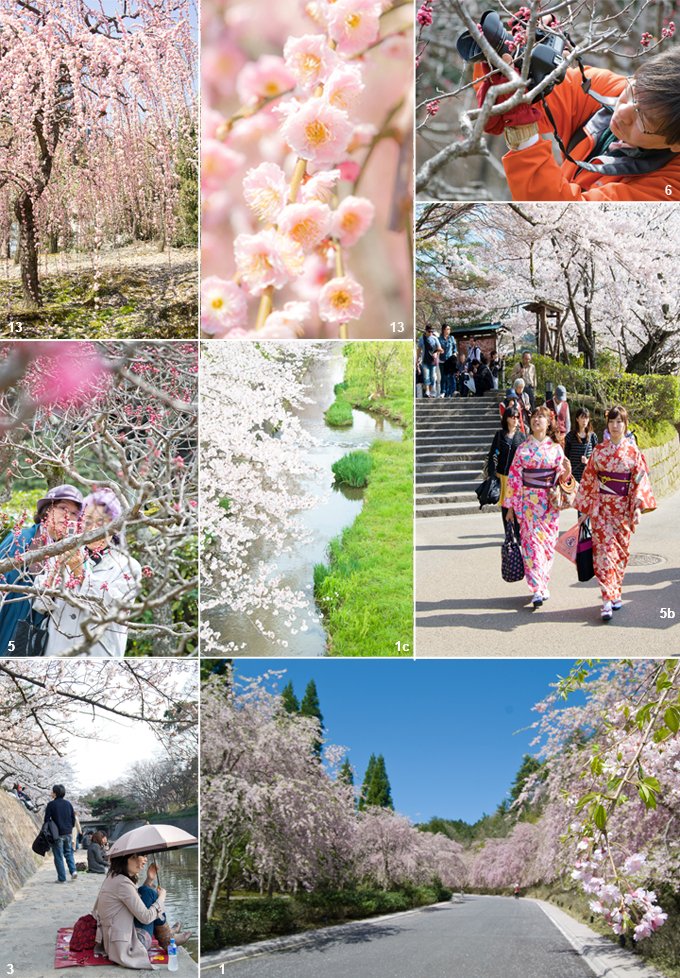