An izakaya in Kyoto 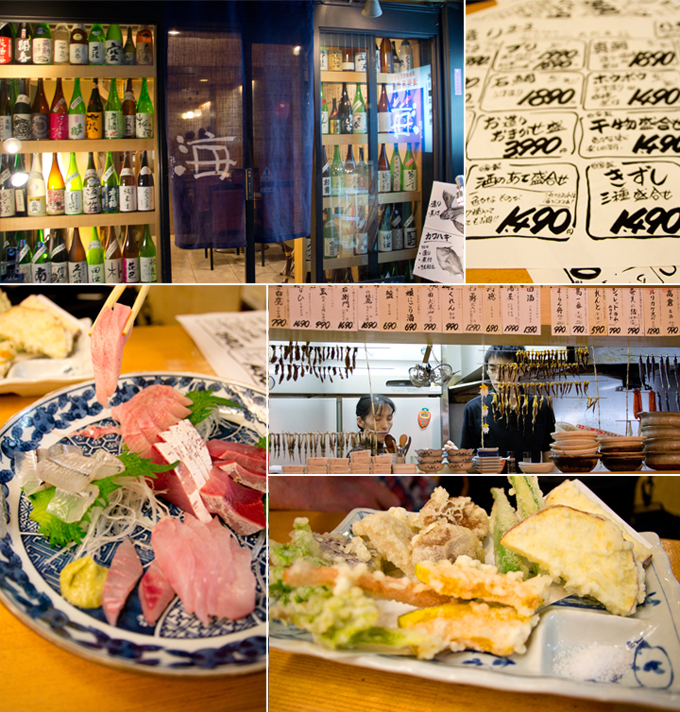 Sometimes you'll find a place that you like so much, you want to keep it for yourself, and your friends. It is your secret 'hide out'. There is one such a place in Kyoto I'm happy to have found a few years ago and I keep coming back.

An izakaya is a traditional bar that also serves food and many izakaya serve food of such high quality you won't only come back for the drinks. This izakaya offers over 300 sake! The names of the sake are written on little sheets of paper, and plastered on the walls which makes for the distinctive and fun appearance of the place. The fish and vegetables dishes depend on the fresh produce of the day therefore the menu is also hand written, only in Japanese. With a bit of understanding of the language you can get around to order and otherwise point at your neighbours' table if they are served a dish that appeals to you. A fun fact: rice or noodles traditionally are not served at an izakaya along with sake, because sake is brewed from rice, and takes the place of rice in a meal.

It is just as well that the menu is in Japanese and doesn't have any pictures, like many other izakaya and restaurants in Japan have. The picture menu's make it easy for tourists to order and make restaurants with these menu's sought after by the less adventurous westerner. As it happens, I'm content spending an evening at a restaurant being the only westerner (including company). It is rather silly, I'm fully aware, but the atmosphere of an establishment changes much when there are many tourists around. Of course I'm also a tourist, but even so I treasure the places that are the least 'touristy'.

The establishment is run by a family of four, father, mother and two sons who all work really hard. As it is common in Japan to smoke in restaurants (which baffles me still, with their appreciation for good quality food), the back of the bar has tatami matting and that's where smoking is allowed.

If you are lucky, you might pass by this place while in Kyoto once and recognize it from the pictures above. Don't hesitate but try a few dishes and sake to accompany them! It's not the cheapest spot around, but the amazing dishes and friendly atmosphere make it worth while. There wasn't a time we visited this place did not end up talking to the patrons at some neighboring table and sometimes even get treated on a dish or some sake. The Kyotites in this place are infused with the casual and friendly atmosphere izakaya are famous for.

Ok, I'll help you out: the name of this izakaya is 'Sea'.
Email ThisBlogThis!Share to TwitterShare to FacebookShare to Pinterest
Labels: eating and drinking, fun, Kyoto