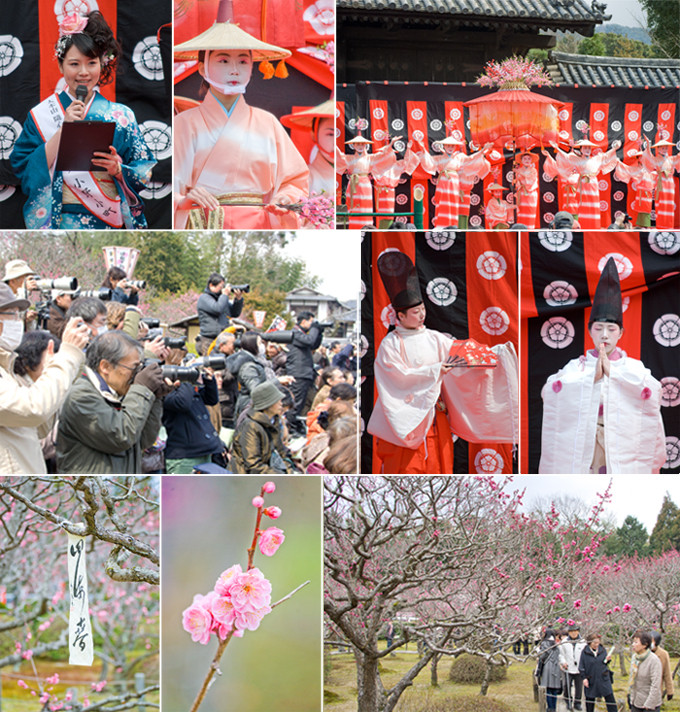 Ono no Komachi, poet in Japan in the early Heian period, was considered to be one of the three most beautiful women in the world. She was the only woman of the rokkasen, the Six best waka poets of her era. (Waka is a classical Japanese short poem.) The Six waka poets were also known as the Six Poetic Geniuses. A thousand years have gone by, but the famous poems of Ono no Komachi are still read today and 'Komachi' became a synonym for feminine beauty in Japan.

The Zuishin-in (temple) is connected with the remembrance of this extraordinary woman. Every year, on the last Sunday of March Ono no Komachi is honoured with the performance Hanezu Odori Dance. Hanezu is an old Japanese word meaning 'light red colour'. Which can be seen in the beautiful shade of red in the kimono of the dancers. The name of the colour does also refer to the late-blossoming ume (plum) trees adorning the 'Ono Plum Garden' of Zuishin-in. The blossoms of these plum trees have this same light red colour and are therefore called 'Hanezu Plum Trees'.

The two slow and elegant dances are performed four times on the day and accompanied with live music through traditional instruments. It is a popular event, so come early if you would like to sit on the benches. Otherwise, join the many photographers on the back rows. Better even, take your own stepladder!
Afterwards enjoy some traditional Japanese food, like soba, and stroll through the Ono Plum Garden. Not only to enjoy the blossoming trees, but also to enjoy the excitement that takes hold of the Japanese nation when the first blossoming flower shows itself!

Link to the website of the Zuishin-in (Japanese), for address and directions.
Email ThisBlogThis!Share to TwitterShare to FacebookShare to Pinterest
Labels: dance, flowers, Kyoto, matsuri and festivals, parks and gardens, performance, temples and shrines, traditional Japan