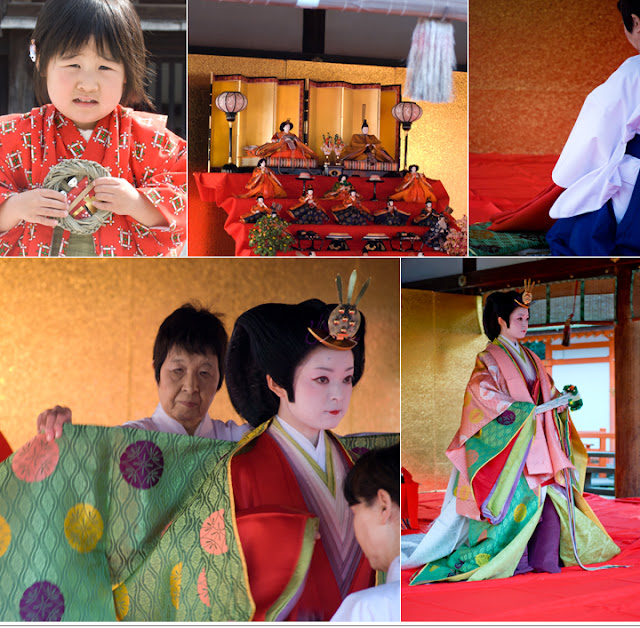 Never before had I spent a day in Japan (79 days all in all, till now) where I was in the middle of such an excited, carefully but certainly pushy crowd. Never too sure about the information found on Japanese websites either (even so thank you Sergey & Larry for Google translate), today I knew I must be in the right place.

March 3rd is a festive day in Japan, specially for girls. This day the Hinamatsuri (Dolls Festival) is celebrated, which is also called Girls Day. Families celebrate and pray for health, happiness and a strong marriage for their young daughters. And today these families visiting Shimogamo Shrine in Kyoto were excited!

Their daughter's futures hang in the balance at such a day and Hina dolls are an important part of it. A few days before the festival, mothers and their daughters make a display at home of the dolls the family has gathered over the years. The 'stage' for the hina dolls can be extended to quite a few, including accessories. These proud displays can cost them thousands of yen. The main dolls in the display, though, are the Emperor and the Empress. So one can start small. Fortunately, one would like to add, for the less prosperous little ones.

Part of the celebration of Girls Day is done by 'Nagashi Bina'. A special ceremony where small hina dolls in their boats made of straw are released on a stream or at sea. Hundreds of people gathered to join or watch the boats flow away. And to add to the festivities, a demonstration was held where a girl was dressed as an original hina doll in twelve layers of kimono! Just like the Genroku-bina doll, she was dressed in a court costume of the Heian period (794 to 1185). Every layer was tied with a knot around her waist to keep everything in place, which would be released after the next layer was added. The last two layers were more elaborate and colorful. These robes must have weighed quite a few pounds on this poor girl, but she was unfased by all the plucking and gentle tucking of the two women dressing her and the heavy garments (and temperature!) she had to endure. A perfect picture of serenity and calmness on this perfect spring day on March 3rd.
Email ThisBlogThis!Share to TwitterShare to FacebookShare to Pinterest
Labels: Kyoto, matsuri and festivals, performance, temples and shrines, traditional Japan